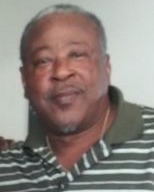 Gerald E. "Twin" Pusey Sr-Gerald E. Pusey 64, Youngstown departed this life on Friday April 30, 2021 with his wife and family by his side at Mercy Health following a brief illness.

Gerald  was born March 19, 1957 in Youngstown, OH son of Oswin and Ethel Lee Floyd Pusey.  He was a South High graduate, class of 1975, and a lifetime resident of Youngstown.  Following his high school graduation, Gerald and his twin brother both joined the military and served in the U.S. Navy.  He also studied at Youngstown State University with an interest in psychology. Gerald built a career as an independent Automotive Mechanic and Detailer.

On September 22, 2020, Gerald was joined in holy matrimony to his long-time companion and love of his life, Rhonda M. Wells Pusey.  Gerald was a man of faith; He enjoyed attending local churches regularly.  He enjoyed fishing, working on cars, cooking, gardening, listening to jazz, and spending time with his canine buddy,  “Sampson”.
Gerald was affectionately known by his nickname “Twin”.  His smiles, jokes, and laughter will be missed by all who knew him.

He leaves to cherish his memory, his wife, Rhonda and his mother, four brothers,  Trevor Pusey of Birmingham, England; Tawana (Denise) Pusey and Jamal (Darlene) Pusey both of Youngstown; and Stepfan (Katie) Melton of Cleveland; one sister, Amoy Pusey Hollinshead; five grandchildren; and a host of special nephews, nieces, relatives, and friends.

Please follow CDC guidelines (6 foot rule) of social distancing and wearing your mask over your mouth and nose. Please do not linger so that the family can start their private funeral service promptly at 12 noon.

F. D. Mason Memorial Funeral Home was given the honor to serve the family during this difficult time of bereavement.

To order memorial trees or send flowers to the family in memory of Gerald "Twin" Edison Pusey Sr., please visit our flower store.