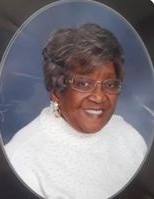 Mattie "Sister" P. Stevens-Mattie Pearl (Carter) Stevens went home to be with the Lord on April 10, 2021, surrounded by her family.

Born February 16, 1928, in Youngstown, OH, she was the oldest daughter of LaMar Carter, Sr., and Mattie Carter. She was most affectionately known as “Sister” to many who knew her. Mattie was united in Holy Matrimony to the late Elijah P. Stevens on May 25, 1943. To this union, two beloved children were born: Fredrick and Carol.
In her early years, Mattie worked at the Clark Restaurant in downtown Youngstown, and later as a seamstress at the Moyer Pants Company for nearly fifteen years; all this, as a wife and a mother. In her forties—after she and her husband raised their children to be self-sufficient—she went back to South High Night School and received her diploma. She matriculated to Youngstown State University, where she earned a Bachelor of Science degree in Education and a certification in Counseling. She went on to become the first African American employed as a Day Care Licensing Specialist in the State of Ohio.

Mattie was a lifelong, dedicated member of New Bethel Baptist Church, and after many years of devoted service, was designated, Deaconess Emeritus. In prior years, she served as a Sunday School teacher, and later, as the Sunday School’s superintendent. With a vision to expand New Bethel’s ministerial outreach, she organized the first Junior Church, Vacation Bible School, and established the Grief Ministry. She served her community as a Den Mother for a local Boy Scout Troop and volunteered for the Unwed Mothers Group. Among her many accolades was a proclamation issued in 2006 by former Mayor, Jay Williams, on behalf of the city of Youngstown, congratulating her “for her many years of service to her family, her church, and the citizens of Youngstown.”
She enjoyed traveling, camping, going on cruises, and just being with her family. Mattie was well-known for sharing gems of wisdom and knowledge with whomever needed it. She lived a Full and Glorious life!

Mattie Pearl Stevens was preceded in death by her parents; a sister, Evelyn Crenshaw; and her two brothers, Kenneth Carter and LaMar Carter, Jr.

There will be a viewing at New Bethel Baptist Church on Saturday, April 24 from 9:00-9:30am. The celebration of life service will immediately follow (live stream available on the church’s Facebook page). In lieu of flowers, the family asks that all monetary contributions be sent to New Bethel Baptist Church—Education Committee (1507 Hillman St., Youngstown, OH 44507).

To order memorial trees or send flowers to the family in memory of Mattie "Sister" Pearl Stevens, please visit our flower store.