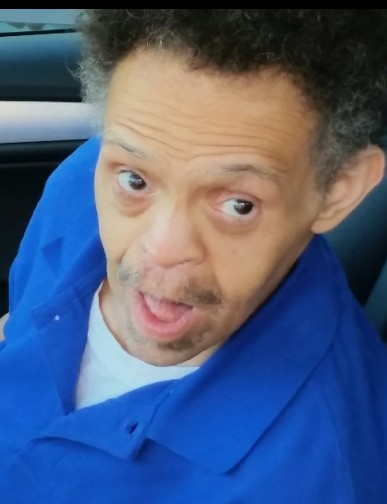 Walter A. Brown-Funeral service will be held 10 am Saturday, November 18, 2017, at Third Baptist Church for Walter A. Brown, 56,  born September 28, 1961 to the late Charles A. Brown and June Thomas Brown, was lifted by his appointed angels and carried to heaven on Wednesday, November 8, 2017 at St. Elizabeth Medical Center.

Walter was a very special, happy, lovable and outgoing young man who captured the hearts of many. He previously attended the Bev Road  and Meshel Masco workshops and recently attended the Javit court Retirement Program where he received a "Special Recognition award for being such a joy to be around in March of this year. Walter was an avid fan of Sponge Bob Squarepants and always carried a book bag with his treasured magazines. Walter shared a strong bond with his sister and caregiver, Valerie McGuire with whom he lived and received remarkable care, guidance, and love. The two were inseparable and was often seen together and received many comments indicating Walter's happiness and friendliness. Walter's memory will be forever held dear in the hearts of many along with his siblings. He leaves 3 sisters, Valerie McGuire of Youngstown, Delores Allen of Rialto, CA., and June Snipes of Youngstown, his brothers; Carl (Frankie Mae) McGuire, Douglas (Stella) McGuire all of Youngstown, and Charles "Nicky" Brown of Terre Haute, Indiana.

He was preceded in death by his parents, and a sister, Bonnie Shivers.

Walter's favorite bible verse, Psalms 121, I will lift up mine eyes unto the hills from which cometh my help" is so appropriate in his passing to a wonderful, glorious place in heaven. Celebration services for Walter will be held on Saturday, November 18, 2017 at Third Baptist Church, 1177 Park Hill Drive, Youngstown, Ohio at 10 am. Calling Hours will be 8:30 am to 10 am. Walter has indeed received his crown.

Many thanks to the nurses, doctors and staff of the Intensive Care Unit at St. Elizabeth Health Center who diligently worked to save Walter's life, and also the Sisters Darla, Louise, and Jennifer of the Spiritual Care Department for their prayers and constant words of comfort.

To order memorial trees or send flowers to the family in memory of Walter Anthony Brown, please visit our flower store.